Doug Mastriano is begging to be smacked down, and Democrats need to seize the moment and knock him down on his Trump-loving butt.

Mastriano, who serves as a state senator from Franklin County when he isn’t working with insurrectionists hell-bent on dismantling our democracy, recently called for an Arizona-style audit of Pennsylvania’s 2020 election results. In fairness, the Arizona audit has been a resounding success, if your definition of success includes handing over millions of legally cast ballots to a firm of partisan hacks with no auditing experience that shipped those ballots off to an undisclosed location in Montana, forever ruining voting machines that will need to be replaced before the next election.

Instead of trying to wreck Pennsylvania all at once, Mastriano called for an audit of only three counties: Tioga, York, and Philadelphia. Here’s a breakdown of how many votes were cast in each county in the 2020 Presidential election: 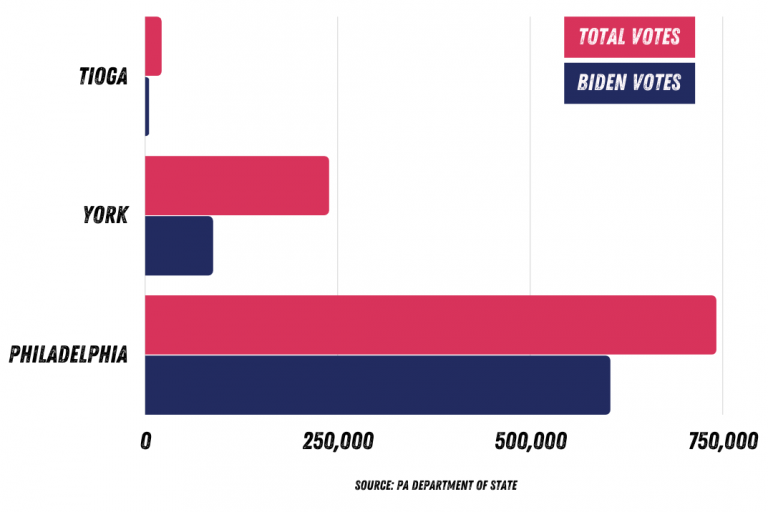 And now, just for funsies, let’s take a look at the percentage of white folks in each of those counties: 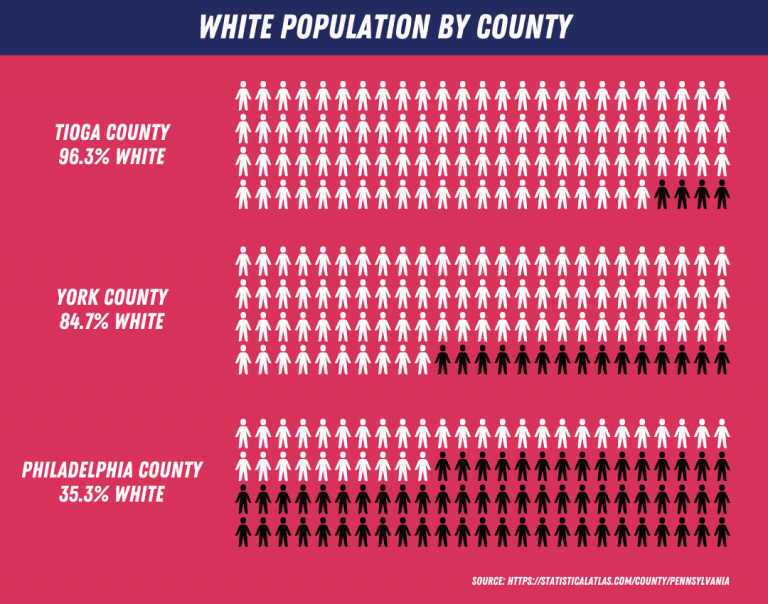 Let’s give Mastriano credit here for being incredibly disingenuous and incredibly racist at the same time. There’s a reason this guy is the frontrunner for the Republican gubernatorial nomination in 2022, after all.

The Best Laid Plans of Mice and MAGA

By including two reliably Republican counties filled with voters willing to sacrifice their firstborn to the altar of Donald Trump, Mastriano is trying to set Democrats up when York and Tioga agree to the audit, and Philadelphia refuses to play along. You can almost hear talk radio teeming with “what do THEY (aka non-white people) have to hide?”

It’s a nifty play by Mastriano designed to build his profile statewide and solidify himself as the clear choice for Trump supporters in 2022. For all of his faults, he is not stupid in the traditional sense. According to his official biography, Mastriano has a doctorate in history and four master’s degrees (Strategy, Strategic Intelligence, Military Operations, and Airpower). While in the Army, he served several combat tours overseas, is a published author, and taught at the Army War College. He’s Donald Trump without the money, but with a real education and legitimate military bona fides.

For all of these reasons, Doug Mastriano is arguably the most dangerous Republican in Pennsylvania. How many times did we avoid further disaster during the Trump administration because Donald Trump has virtually no concept of using power to govern effectively? We were saved more times than we’ll probably ever know by Trump’s utter incompetence at his job.

But Mastriano is smart enough to use his angry, racist mob in ways that Trump lacked the intellectual capacity and inability to look beyond his own ego to comprehend. With the Republicans holding substantial majorities in both the State House and Senate, Doug Mastriano as governor could quickly gut Pennsylvania as we’ve never seen before- right to work, voter suppression, pro-life, open carry without a permit, you name it. And once you cross those lines, it’s nearly impossible to come back again, even when Democrats retake control.

So let’s step back from the ledge and focus on Mastriano’s election audit play. Democrats need to seize this opportunity to expose him for the radical, wanna-be dictator he is. If Doug Mastriano wants to be in the spotlight, let’s crank the light up so brightly that he burns up in the process.

First, counties need to tell Mastriano exactly where he can shove his audit request. He has zero legal authority to demand an election audit as chairman of the Senate Intergovernmental Operations Committee. None. Nada. Not even a little bit. I’ve even gone to the trouble of preparing a sample letter for counties to use as a template:

Next, counties should make it crystal clear that Mastriano will have to go to court to access sensitive voting information and equipment. Let’s be clear- we want this issue to play out in a court of law instead of the court of public opinion. What is he going to do when he can’t produce any hard evidence to justify his self-proclaimed forensic audit? You can almost hear the Democratic majority on the State Supreme Court salivating at the prospect of writing an opinion that utterly and completely destroys Mastriano on every level possible.

Speaking of the court of public opinion, there should be a statewide Democratic blitz framing Mastriano (quite accurately) as “the politician trying to access your private personal data. What’s next- will he be trying to get your credit card information? Your internet search history?” Ramp up the fear factor and take it to the next level, letting him see how he’s not the only one who can manipulate an ignorant and uninformed electorate. Give the jagoff a taste of his own medicine.

Furthermore, counties should demand that Mastriano put up a bond to cover the insane cost of new voting machines in the counties he wants to audit, citing the problems in Arizona. (Spoiler Alert- he’s not going to be able to come up with the millions of dollars needed.) Without certified voting machines, Mastriano will be creating the very election instability that supposedly keeps him up at night. It’s clearly a sore spot he can’t answer, because he has already issued a statement deflecting the question.

Beyond the counties themselves, it’s time to pressure Mastriano about the extent of his role in the January 6 insurrection because his story doesn’t pass the smell test. From his own interviews, we know that he was at Donald Trump’s speech and then moved to the Capitol in time to see the defenses breached by the insurrectionists. Then he posed for a selfie with former State Representative, Trump sycophant, and certifiable crazy person Rick Saccone, who posted, “we’re storming the capitol. Our vanguard has broken thru the barricades. We will save this nation. Are u with me?” Mastriano later distanced himself from Saccone, claiming not to know him very well, which totally explains why he had a big smile on his face and his arm around Saccone in the photo.

But the kicker is Mastriano’s claim that just after his selfie with Saccone, he decided he’d had enough violent overthrowing for the day and walked back to his hotel, where he presumably took care of his formidable insurrection erection.

So to be clear: Mastriano traveled to Washington, went to the Trump speech, marched to the Capitol, posed for selfies with insurrectionists he now pretends he doesn’t know, and at the height of the insanity, he decided just to go home? Does anybody seriously believe this?

Here’s another question: as an officer of the United States armed forces, albeit retired, why did he flee as the nation’s Capitol was under siege? Didn’t he swear an oath to “support and defend the Constitution of the United States against all enemies, foreign and domestic?” (Spoiler Alert- he did.) Where did THAT guy go?

If Doug Mastriano is the patriot he pretends to be, why didn’t he step in and assist the Capitol Police Officers as they fought for their lives to protect our elected leaders? Why didn’t he try to disperse the crowd by calling on reason and denouncing violence as a solution? Why didn’t he go on social media and urge everyone to stand down and go home? Why did he violate the solemn oath he swore in the eyes of God? The press should be hounding this clown non-stop until he gives us some real answers.

It’s time to force this guy to choose a lane. Whose side is he on here? If he says he stands with the insurrectionists, it’s much easier to brand him as the traitor he is, which will impact his ability to raise money and support from Republicans who want to avoid that stink. And if he stands in opposition to the insurrectionists, he immediately loses a ton of street cred with the Trump voters he has worked so hard to groom. It’s a win-win for Democrats.

Slick politicians like Doug Mastriano understand that performance art has replaced policy as the measure of success in the Republican Party. He thinks he knows how Democrats will respond, which is factored into how his message will play to the Republican base he is courting. So instead of giving Mastriano the reasoned, logical response he expects to his Election Audit performance piece, Democrats need to come back with a full-on attack. Take Mastriano’s military service, his political strength, and flip the script by openly questioning his actions on January 6. It’s not hypothetical- he was there and failed to honor his oath as both a State Senator and an officer in the United States Army.

By responding to Doug Mastriano with the same amount of brazen disrespect he’s treating our democratic processes, Democrats can send a strong message to him and other Trump toadies that their words and actions have real consequences. If the Republicans refuse to support and defend our democracy, we sure as hell will. And if it means knocking faux patriots like Doug Mastriano on his ass in the process, then so much the better.

The Keystone Reckoning Project is a Political Action Committee funded solely by donations. If you like what you see and want to help us grow, please make a recurring monthly donation now.